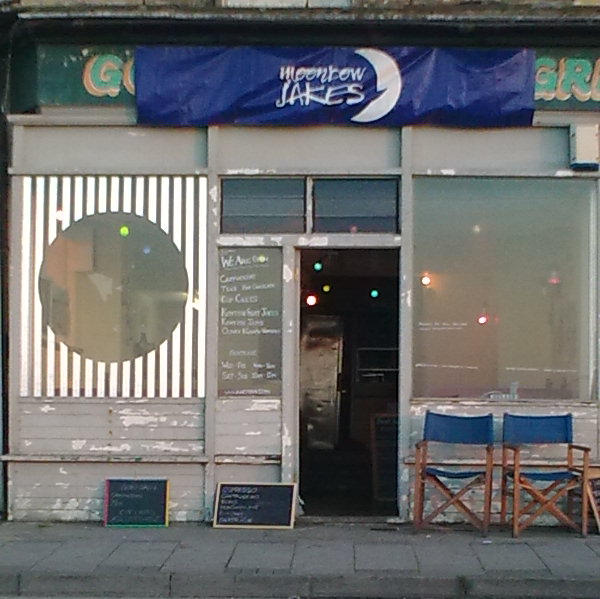 Moonbow Margate** was an abstract art performance intervention in a derelict cafe in Cliftonville, investigating the impact of the new Turner Contemporary art gallery and the role art-led regeneration has on a local community.

Moonbow Margate was 3-month temporary performance intervention in a derelict cafe situated on a long-time neglected and disused parade of shops in Cliftonville, Margate, on the East Kent coast, England.  Less than 5 minutes walk away was the then hugely controversial £18m, Turner Contemporary art gallery. The intervention ran through the summer from June to September 2011, seeking to become a representation of the change that often takes place following art-led regeneration. The project sought to be reflective of the way local people view, interact and adapt to such top down change.  The ward in which the café was located remains one of the most deprived in the UK.  Unemployment was above the national average in 2011 and the area had a large overseas population.

Operating as a functioning café bar the intention was to use live performance and art exhibitions to explore differing aspects of the physical, emotional, political and communal change that takes place in an area designated for art-led regeneration. The intervention engaged with the ideas of shifting demographics, culinary tastes, housing stock and commercial investment, affordability, change resistance, displacement, community, apathy, culturalism, memory and nostalgia.

It was accepted that by creating this space, even for a short period of 3 months, it would be embedding itself within the narrative and the ripples would in themselves be a disruption to the order of any change already taking place. Little could have been known in how big the ripples would be from this project. What follows are blog posts and stories from this incredible three summer months in 2011.

Moonbow Margate Posts are migrating from an old Wix account, to see all blogs and photos follow link here.

Blog posts will be posted next and links posted here